Mark Goble
Coach Goble has always been known as a great recruiter and developer of young talent!
He began his coaching career in 1985 in Calgary with Team Canada’s 1988 Olympic Hockey Program while attending the University of Calgary and studying Kinesiology graduating in 1992.
After the Olympic experience with the legendary Coach Dave King, Coach Goble was selected as an Assistant Coach with the Calgary Buffaloes who went on to win the prestigious 1989 Air Canada Cup National Midget Championship in St. Johns, Newfoundland.
From Calgary, Mark moved on to the Western Hockey League an Assistant Coach with the Tri-Citi Americans under Rick Kozuback before settling down in British Columbia with his family. As he settled in Coquitlam he was recruited and worked as an Assistant Coach for the North Shore Winter Club Team that won the 2003 Quebec International Pee Wee Tournament.
The BCHL was a natural next step for Coach Goble where he spent 11 seasons developing players as a General Manager, Head Coach and Assistant Coach developing players like Alexander Kerfoot & Brendon Morrison.
When Coach Goble’s family increased in size, he stepped back from professional coaching to assist with coaching his son’s minor hockey association team and also serving as the Director of Coaching.
With his son’s minor hockey coming to an end Coach Goble moved on to the PJHL with the Grandview Steelers, serving as an Assistant Coach until ultimately working with the Yale Hockey Academy, coaching both the U17 and U18 teams for the past two seasons.
“I am excited with the opportunity to bring that passion and drive to the Abbotsford Pilots Hockey Club!” – Coach Goble 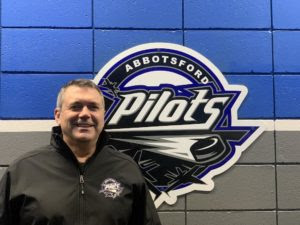 Coach Doug started his hockey journey growing up in Penticton and moving on to play 81 games for the University of Wisconsin-River Falls Falcons.

Despite his small stature, he was a four year All Conference goaltender and was selected to the 1983 All American Second Team after winning the 1983 NAIA National Ice Hockey Championship.

Cole went on to sign and have a solid first year in West Germany in 1985-86 but unfortunately an off-season training knee injury ending his playing days.

Returning to finish his University Degree, he jumped into coaching as the volunteer assistant for the University of Wisconsin Falcon Men’s Team in 1987 before graduating and moving back home.

Once back in BC, he worked as an assistant coach with the BC Best Ever Program, Penticton Knights, New West Royals & Burnaby Bull Dogs of the BCJHL (BCHL) before accepting a position with the Vancouver Canucks as a Video Coach from 1993 – 1999. He considers himself very fortunate to have worked with Pat Quinn, Tom Renney and even Mike Keenan.

As an early adopter of technology for Coaching, Doug was immediately recruited to work with Avid Sports helping to design VEGA (Video Enhanced Game Analysis), the first hockey specific coaching software tools used in the NHL, Major Junior and the NCAA and continues to consult with Catapult to this day.

“It is our plan to utilize the video coaching technology to help develop our players & I couldn’t be more excited to work with Coach Goble, Coach Vial & General Manager Jack Goeson and this storied franchise!”  – Doug Cole 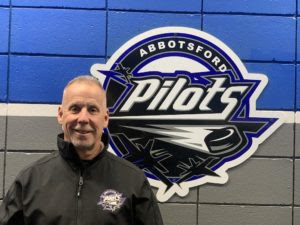 Mike Vial
Coach Mike grew up in Sault Ste Marie, Ontario playing his Junior hockey in Sudbury in the early 90’s which were a great fit for this smooth skating offensive defenseman.
Moving on to college, he was a member of the Cambrian College Golden Shield Men’s Hockey Team that were CCAA National Men’s Hockey Champions in 1997 and the runner up the following year after a double overtime loss. The crafty skilled d-man was voted a First Team All Star In both National Championship series and a photo of that team resides in the Sudbury Hockey Hall of Fame.
After college Mike played with the Macon Whoopee of the CHL before agreeing to sign in Italy. Unfortunately, the body couldn’t keep up to the heart and forced retirement in 1998 and a move to Vancouver with his wife.
While raising a family and volunteering for the Port Moody Minor Hockey, Mike has successfully developed young players at all levels including U15 & U18 with his ability to connect to the young players through his strong quiet example.
“I want to Thank Mark for the opportunity to work to Abbotsford Pilots organization!” – Mike Vial 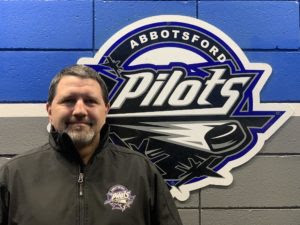